skip to main | skip to sidebar

Damn - I think I've officially become an old lady now. Apparently my bones are in danger of breaking any moment. I didn't think the DXA scan was really necessary, even though I've broken three bones in the last few years, and now I'm not sure that I really wanted to know the results. Presumably I've had osteoporosis for some time, so I'm not getting out the bubble wrap just yet. It's undoubtedly years of being underweight that's done it. Of course now that I no longer have hormones and therefore hardly any migraines, I'm not underweight any more, but I have to live with bird bones as a consequence.
Posted by Di at 6:17 am 1 comment:

What a fantastic sail we had yesterday! It was a bit of a no-brainer after church to pack up a picnic to have on Fidelio, since the sun was shining, there was a good breeze and the dogs were happy after their morning walk. Heading across to Gourock was the simplest option given the wind direction, although there's always a chance of getting in the way of ferries that way. I have to tell you, we got in the way of the Cally Mac, the Western and even the Waverley and they all changed course for little 28ft Fidelio. Steam gives way to sail and so do diesel engines! On the way home we were joined by a pair of porpoises that followed us, weaving in and out and under the boat and generally causing me to go off course and Rob to let the spinnaker flap. Fortunately not too many other boats around for us to get in the way of. All in all, a splendid afternoon. And the picnic was good too.
Posted by Di at 11:25 pm 2 comments:

My computer seems to have become my best friend and that's scary. It's also not quite true, but the elements are there. I now turn to the little silver box on my table for entertainment throughout the day (especially if it's raining). It's a wonderful procrastination tool against housework and other such dull chores. I read emails and messages and facebook several times a day, enjoy an ongoing game of Scrabble with my brother, watch TV programmes on iPlayer while eating lone meals (when I used to read), buy whatever I want online and waste a lot of time looking for the best deal, look up information on just about anything that flits into my butterfly mind, know what's going on in the lives of all sorts of people, some of whom I've never met and some of whom I haven't seen for years . . . I could probably go on but I'm beginning to bore even myself. You get the picture.

My little silver box is a wonderful thing in so many ways. And yet it has its dark side. If the Internet's not working I get really agitated. Things are going on without me! I might miss something! Oh no, I can't look and see who else is sitting at their computer playing Farmville or whatever! Hmm - getting a bit obsessive here.

And that's the thing. I'm kind of obsessed.

I tend towards being a receiver rather than a giver online. Blog posts are few and far between and Facebook and Twitter updates are sporadic, mainly because I don't believe folk can be remotely interested in what I'm doing most of the time. But wait a minute - I love reading about what they're up to, I get a buzz when someone I've been thinking about communicates. I worry if they haven't blogged/twitted/facebooked for a while unless I know them to be on holiday or somesuch. I panic if someone 'unfriends' me on facebook - what have I done to upset them?

I'm letting the little silver box take over my life.

A few years ago I took a conscious step back from the little silver box (it was a pretty blue box called Bluebell then) because I recognised this obsession in myself. In those days it was Instant Messenger and I would sit of an evening or an early morning 'chatting' to several folk at a time. It began to take over. Some people seemed to live in my computer. Every time I opened it up they were there, wanting to talk. It had to stop.

But now, it seems half the world shares my obsession. If I back off, I'm actually in danger of worrying lots of people who really care about me. It's all gone much too far to back off, and anyway, I love it! If I wasn't writing this blog post, I'd be forced to go and hoover the stairs.
Posted by Di at 7:07 pm 6 comments:

I think the sermon's finished. I do enjoy poking around and trying to come up with something that people might want to listen to. I even quite enjoy delivering it, presumably because even after retirement I retain that annoying teachers' trait that compels me to impart information to anyone who'll listen. It's especially exciting if I've only just found stuff out for myself, so the research is probably the most important and enjoyable part. As a lay person I can't preach as such. I can only read, research and share my ideas, and if anyone wants to argue with me, I'm cool with that so long as they don't get nasty.

But it all takes time. I can't imagine how it must be to have to come up with something every week. I suppose people ordained folk have a good theological training behind them. I can only hope that if it works, God must be in there somewhere.

So we'll see how my take on the Transfiguration goes.

In other news, I made bagels yesterday and they're pretty good. However they don't quite have the chewiness of the authentic ones we used to get in school. Maybe they need to be boiled for longer.
Posted by Di at 5:26 am 1 comment:

I do like getting something for nothing. On Wednesday's morning doggy excursion with my next door neighbour, we came across two huge redcurrant bushes at the side of the path, groaning with fruit shining ruby red in the sun. It didn't seem to belong to anyone, so the next day we returned with scissors and poly bags and spent a happy half hour picking while the dogs pottered round, helping themselves to the odd low-growing berries. Home we went triumphant with a couple of pounds each and plenty left on the bushes for someone else and the birds. Most satisfying.

Being a fan of redcurrant jelly, I phoned my 90 year old mother-in-law for advice. She offered to make the jelly for me and sounded really excited at the prospect. I could perfectly well have done it myself, but who am I to spoil an old lady's fun? After various telephone updates on the jelly's progress, I picked it up today - three jars of beautiful jelly for the price of a bag of sugar and one very happy MIL.

And I put some of her strawberry jam to good use yesterday when Mr and Mrs Blethers and their small granddaughter visited. We made jam tarts so that she could take them home for her tea (they were too hot to eat straight away), which proved most diverting. Jonny-dog was trying to make friendly overtures to little Cat, and took the opportunity to lie on Mrs B's foot, thus pinning her to the floor, while he had the advantage. He doesn't usually get within a yard of her without fierce admonishment, but both behaved impeccably.

Masterchef Heathbank, huh?
Posted by Di at 1:25 am 1 comment:

Okay, it's been more than a year since I updated this blog. I think Facebook probably has a lot to answer for since it appeals to my laziness as a quick and easy option. It's also a great way to stay in touch with family and friends who can't be bothered ploughing their way through the convoluted pathways of my mind.

It's been a year of fantastic highs and some pretty awful lows, none of which I'm going to dwell on because they're in the past. I think a blog should be about the here and now, so this is what's going on in my life at present:

The good stuff
Out of my window I can see a couple of young blackbirds (or they might be thrushes - it's too far away to tell) trying to balance on the berberis, a flock of baby great-tits on the bird feeder, and I can hear, but not see, at least two bullfinches and a tawny owl (ours seems to have forgotten that owls are supposed to hunt at night and hoots all day!). I love the baby bird season!

I'm working on a talk about the Transfiguration for a week on Sunday.

The garden has lovely bits: the greenhouse with ripening tomatoes, the trees and shrubs, and scruffy bits: the veg garden that needs weeding, the driveway where the weeds seem totally resistant to the mimsy modern weedkillers you can buy these days and the hill behind which is my bird sanctuary. Maybe today I'll have a go at some of those weeds, but actually they all disappear in the winter so maybe I won't.

The bad stuff
I'm worried about a dear friend who's in hospital with a really nasty infection following cancer treatment and I'm carrying something in my pocket to remind me to pray for her.

So there we go - that's me. More good than bad, pretty boring, but maybe boring is good.
Posted by Di at 7:59 pm 2 comments: 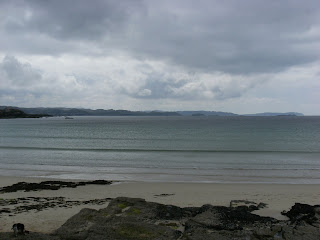 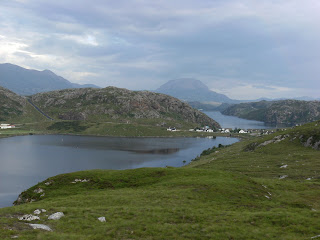 I really didn't want to leave. If I hadn't been preaching yesterday, I'd have tried to negotiate another few days at Clashview. There's lovely caravan in the grounds that I wouldn't have minded moving into. As it was though, we had a good journey home at a stately pace as befits people travelling in a monster Mercedes that can actually do 0-60mph in 7.5 secs. Thanks, dear Bill, for lending it to us!

Looking back on the holiday, and how stressed Rob and I were when we arrived, it was just what we needed. It was fun to have the family for a few days and let them cook for us and keep us entertained, but when they departed and peace and quiet reigned, it was therapeutic to have no responsibilities. Hooray for holidays!
Posted by Di at 8:23 pm 1 comment:

Di
I'm retired from teaching and happily occupied with my family, my friends and my interests.